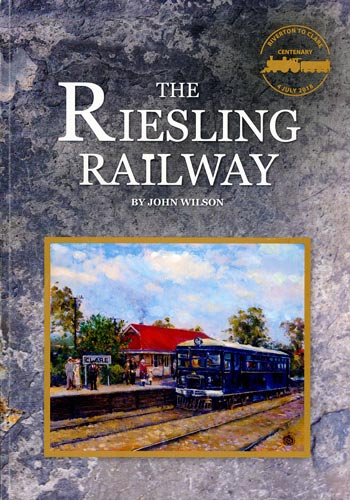 The Riesling Railway, published July 2018, is was the first book produced by author John Wilson and is about the history of the Riverton to Clare and Spalding branch-line that was produced for the centenary of the opening of the railway to Clare in July 2018. This book comes with a USB flash-drive that contains many maps, diagrams and useful information.

The Riesling Trail is the re-incarnation of part of the Riverton to Spalding railway branch-line that ran through the Clare Valley. It has become a major tourism attraction for the region but there was very little by way of history that was offered to the tourists who used the trail. July 2018 marked the centenary of the opening of the railway to Clare and seemed an appropriate time to produce and publish a history. The intention was to produce a book that tourism operators in the Clare Valley would have on show at their establishments, so that their guests could soak up some history before venturing out on the Riesling Trail.

The book is more than just Clare. There is a large section about Riverton, the history of the Railway Refreshment Rooms and the 1921 shooting of Broken Hill MHR, Percy Brookfield that has been described as the first political assassination in Australia. There was also the "Baby Health Train", which was a mobile baby-clinic set up in one half of a carriage and the other end set up as living quarters for the Clinic Sister. This mobile clinic would be away for eight weeks at a time, shunted on and off at the various sidings. There was the Broken Hill Express, with its high-wheel S class locomotives and the colourful drivers like Matthew Eyes who had all manner of tricks to keep the Express on time. On one occasion he requisitioned some oatmeal from the Riverton station-master, and poured it into the boiler injector pipe and thus fixed a leaking boiler.

The book comes with a USB Flash Drive which is crammed full of data and detailed station diagrams.

Brill railcar No. 106 at Port Pirie in November 1966, about to depart for Peterborough where it will connect with the Broken Hill Express.

Purchase your very own copy of The Riesling Railway  online today.

If your'd like to purchase your very own copy of The Riesling Railway  in store, please feel free to checkout our stocklists.